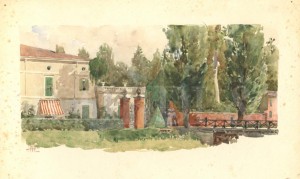 There were strong ties between Verdi and the land. The first earnings from his operas were used to buy pieces of land which, in the course of time, formed a vast property situated to the north of Busseto, between the Ongina, the Arda and the offshoots from these two rivers with the Po. Only a part of this vast property was cultivated directly by Verdi with guidance from Mauro Corticelli, a theatrical impresario and old friend of Giuseppina Strepponi’s, who, for many years, acted as a superintendent at Sant’Agata’s. The rest of the land was let out to part-time agricultural workers or to tenant farmers, both of which used daily labourers for work in the fields. 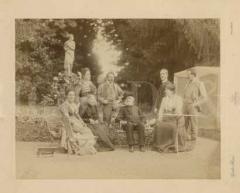 Verdi’s love for his land emerges quite clearly from the fact that the place in which he preferred to live was the Villa Sant’Agata, where he remained with his wife, Giuseppina Strepponi, for the better part of the year from April through to the autumn.

His life-style there was that of a wealthy land owner, with hunting parties, long walks on foot or on horseback, but Verdi was also always ready to involve himself in agricultural or building works.   He enjoyed this life so much that he regularly delayed his departure for Genova where the couple, above all on his wife’s request since she hated the rain, fog and cold weather of the Bassa Padana, stayed during the winter season. A further element which gives us an idea of the close relationship between the composer and his land is the fact that he gave the names of his operas to many of the trees that he personally planted in the park surrounding his villa: a Rigoletto plane tree, a Trovatore oak tree and a Traviata Weeping Willow. 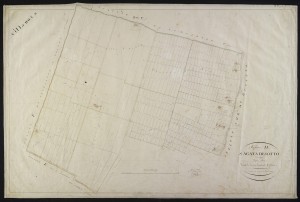 The historic period in which Verdi found himself running a large property coincides with a very grave agricultural crisis which began to make itself felt in the years 1877 – 1878, a crisis that was critical for the population of farmers and land workers who then made up 70% of the active population. The arrival of an ever-growing amount of cereals at competitive prices in comparison to the national production brought about noticeable difficulties in the lives of farmers and land workers, a situation which was delicate even when general conditions were more favourable. On the other hand, the arrival of the Left wing to political power brought about a long series of reforms (on paper at least) ranging from the obligatory extension of the right to vote to a new tax system, all of which turned out to be a strong delusion for the disadvantaged classes. The democratisation of the country, apart from some small outward changes, collapsed in the face of an exercise of power, which in the course of its transformation, tended to attract into its orbit all the dissonant voices which were then neutralised and homologised.

This was the kind of government that was certainly not appreciated by Verdi and that led him to affirm, in a letter to Count Arrivabene on the 27th May 1881: “What one asks is that those who are responsible for the public good should be citizens with considerable preparation and transparent honesty (…..) I have sad forebodings about our future! The Leftwing will destroy Italy”.

Faced with this situation Verdi, the great landowner, tried to intervene to correct injustice and to alleviate the difficulties of the population through a series of philanthropic activities resulting from a paternalistic attitude which led him to refuse, with absolute decision, every suggestion of social change as well as use of force on a population without work and bread.   In other words he manifested a total lack of approval for the brutality of police repression against the defenceless population, but equally, on the other hand, total rejection of populist and socialist movements which tried to upset the current social situation within which Verdi had conquered, at a high price, a privileged position.

To further exasperate the conditions of the population meant, for Verdi, giving a hand to demagogues as well as placing social order in danger.

Here again Verdi reconfirmed a decision taken as a young man, as far as politics were concerned, when from being a fervent follower of Mazzini he had been transformed into a convinced supporter of Cavour’s strategies. It is no wonder, therefore, that he believed that the masses should be guided by a firm but benevolent hand; including the distribution of money and food to those in need, assistance for abandoned children, support for land labourers without work. But, after further inspection, it can be seen that Verdi’s philanthropy brought about a change of heart with regard to the land towards which he had always, since his youth, felt such an irresistible attraction.

If at the beginning the investment of his first earnings in land had been undertaken in order to assure a future income, once his acquired wealth, due principally to royalties from publishers, Italian and foreign impresarios, meant that he had no fear for the future, he expected no income from his land but felt a duty to do what he could to better the life of the masses.

In a letter to his friend Arrivabene on the 23rd December 1881, Verdi affirmed: “Last year I built a barn, this year two more that are even bigger: almost two hundred labourers have worked until today, and I have left instructions that they are to start work again as soon as the ice will allow them to do so. The work being done is superfluos for me because what they produce will not bring in a cent more of income, but in the meantime, the people earn money and in my village the families are not emigrating”.

Land had become, for Verdi, no longer something to possess or a fountain of personal wealth, but the means whereby he could give employment to labourers, land workers and tenant farmers, for whose existence Verdi, without doubt a profound conservative and paternalistic figure, felt the need take responsibility.